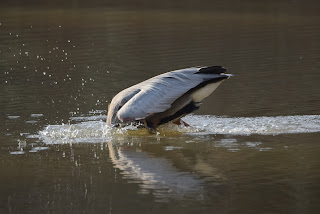 Hey hey it Ans with another birding story for the week.

Today we are going to talk about this Great Blue Heron catching fish.


I recently took this photograph at my neighborhood pond on January 1, 2020.

The story goes this great blue heron was looking around at the pond to see what it could hunt for in the afternoon. In a matter of a few minutes it found its first fish and caught it and ate it and then a few moments later it searched again for another fish to catch and hunted for it again and caught its dinner for the day.

A few people scared off the heron and then it flew to the other side of the pond where it continued to hunt for fish in the beginning of 2020. It did not get spooked again from the people that had spooked it from before and continued to hunt until sunset.