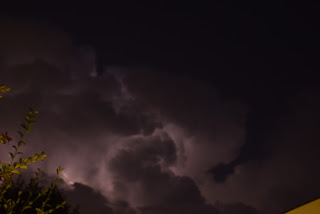 Finally, The day has come that I did my own lightning pictures yesterday..

I bet my mentor Al D did not take advantage of this storm of lightning photography instead i did.

When I had gone outside to do some night shots of critters in the dark , I looked up and there was a lightning show appearing from a storm that I had looked on the radar map. I took advantage of the thunderstorm shoot and did lightning pictures instead.

The storm cell , I had been looking at on the radar was 4 miles southeast of where I live. But this time I did the pictures on my own and I got amazing results of the storm. 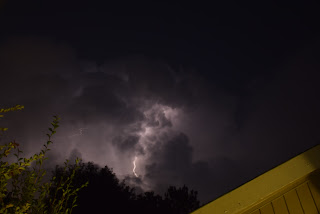 I saw many lightning bolts and inner cloud lightning in this storm cell. Which made it very cool to photograph at night, You have to wait for it to be dark enough to see the lightning at night and photograph it . 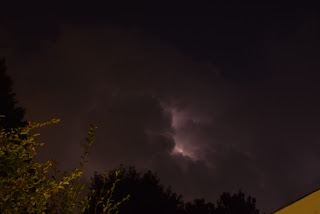 I went under the manual setting on the camera and set it to the time exposures and counted down when each lightning bolt had occurred and triggered the shutter to make these pictures happen.

I checked all around me to see what the conditions of the storm were doing, along with the nature of lightning and how to be safe doing dry lightning pictures.

This picture to left is inner cloud lightning, which is cool to photograph at night .

I was amazed at how well I am doing with lightning photography now.